Though Saigon has significantly innovated itself after the Reunification day, the horrific scars still remain. Primarily containing exhibits associated with the American phase of the Vietnam War from 1961 to 1975, the War Remnants Museum serves a reminder of the huge devastation caused by the war. As one of the most popular attractions in Ho Chi Minh City as well as one of the must-see museums in Vietnam, the museum is the place to learn about atrocities of the war and war crimes and to honor people sacrificed for the freedom of Vietnam.

The history behind the history

Originally, this museum was known as an electronics maintenance center of both the US Army and the former Sai Gon regime. In 1975, just months after the fall of Saigon, the government of Vietnam opened the “Exhibition House for US and Puppet Crimes”. At the beginning, the museum attributed propaganda that highlighted the horrors of war with a heavy political bent. The prime message is American atrocities. When America and Vietnam normalized relations in the 90s, the museum’s name was changed to the “Exhibition House for Crimes of War and Aggression”, before finally ending up as the name it still has today — the War Remnants Museum – a diplomatic trade-off for the lifting of sanctions, which had crippled the Vietnamese economy. 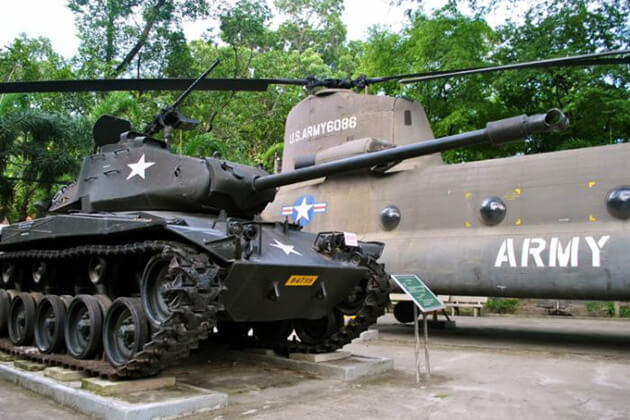 What to see in the War Remnants Museum

The War Remnants Museum consists of outdoor exhibitions and three floors inside the building with galleries of permanent as well as temporary exhibitions on each level.

When entering the front gate of the War Remnants Museum, you will see a number of large military weapons used the US Army during the war, such as heavy helicopters and aircraft of the US Air Force and bulletproof tanks placed in the yard. In addition, there are numerous kinds of weapons, like rockets, mines and bombs that had their detonators removed before being displayed here.
In the back, a small entrance leads you to the Tiger Cages – a replica of the real Tiger Cages used in Con Dao Prison. Tiger Cages were wire cages which the Government of South Vietnam secretly kept the political prisoners. The section only showcases a small part of the original exhibit with a tiger cage on gravels, statues of malnourished prisoners inside two dark cells, and a variety of black and white graphics of that phrase. The exhibition never fails to give you a confrontational glimpse of sinister acts and war crimes against humanity. 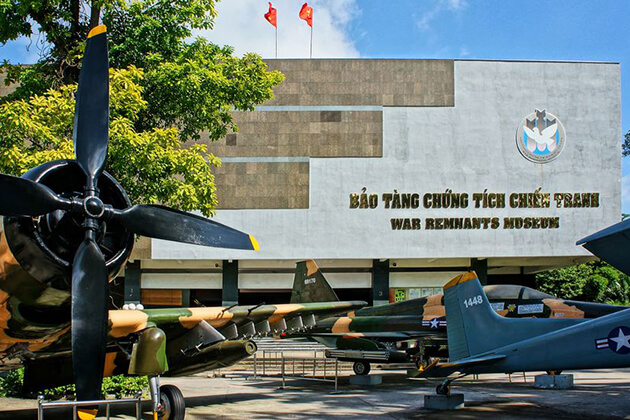 Inside the museum is a more disturbing experience. Upon the moment you enter the ground floor of the museum, a hushed and somber atmosphere can be felt immediately since photographs, artifacts and graphic displayed pop into your eyes, showing the horror and the cruelty of the war. Many of the exhibits and pictures are explicit, but they tell important stories. The Requiem Exhibition is the most notable section housing a collection of photographs compiled by the famous war photographer Time Page. The graphics photography demonstrates a phase of painful history and unveiled unknown stories about the war to everyone, especially to Westerners.
Permanent exhibits presented upstairs are well-captioned in both Vietnamese and English. There are hundreds of impressive pictures and artifacts that show how people all over the world support the Vietnamese in their resistance against the US and protest against the Vietnam War, show the crime of the war and its extreme effects on Vietnam as well as innocent civilians. It also displays some remnants American soldiers presented to the museum to show their regret of having taking part in this unjust war. The destruction by the chemical toxic brought to Vietnam and the affection on the people in Vietnam is also exhibited. During the War, the US Army sprayed more than 100 million liters of chemical toxic which poisoned Vietnam’s soils and affected millions of Vietnamese people.
On the highest floor, many thrilling pictures like forests destroyed by chemical poison, the weapon and many other remnants could shock you as you could never imagine such devastating consequences, even though you may have heard about the Vietnam War before. 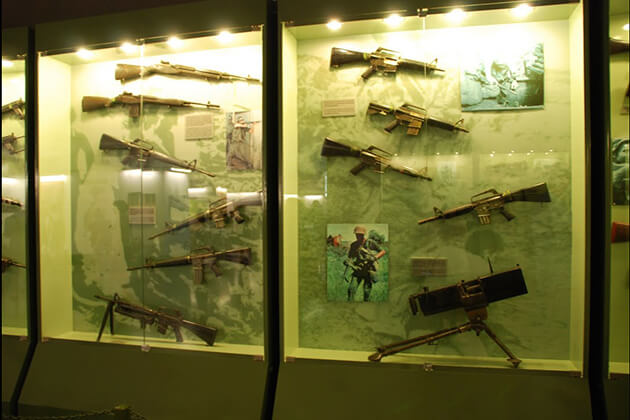 – War remnants museum opening hours: 7.30 AM – 5.30 PM from Monday to Sunday, including Vietnamese holidays.
– Phone number: +84 28 3930 5587
– Location: No.28 Vo Van Tan, District 3, Ho Chi Minh City
– Entrance fee: VND 40,000/per person. The price is applied for both Vietnamese and foreign visitors.
– Recommended visit: 1.5 – 2 hours
– Dress code: Casual but not too revealing
– Transportation: The easiest way to get to the museum is taxi which is always available in all the touristy areas. If you take a taxi from District 1, the trip should cost less than 50,000 VND ($2.21 USD). If you want to save some dollars and you’re feeling adventurous, bus route number 14, 28, 06 would be some brilliant recommendations. The Grab app is also a great choice. Be aware of motorbike taxis as you may get overcharged.
– If you wish to get to know more about the Vietnam War phase, the Cu Chi Tunnels and the Reunification Palace are other historical attractions that you may take into consideration in Saigon tour program.