Vietnam is a country with thousands of years of history. This long established country has a lot of things to see and study. During your Ho Chi Minh City tour, don’t forget to visit Vietnam History Museum – home to thousands of artifacts collected in Vietnam and abroad on anthropology, archaeology and ethnology. In the museum, you also can have an overview of the turbulent history of the country through exhibitions of different eras, dynasties and ancient cultures. With the abundant artifacts, the Museum of Vietnamese History is an appealing attraction alluring numerous domestic and foreign tourists as well.

The Establishment of the Vietnam History Museum

Vietnam History Museum was established based on the initial facilities of Blanchard de la Brosse Museum which was the headquarter of Association of Indochinese Studies and under the administration of French School of the Far East. At first, the museum exhibited various artifacts related to the culture and early civilization of Asian countries such as China, Japan, Thailand, Vietnam, Khmer, and Champa. From 1959, the guided tour become popular, drawing people in Saigon to visit the museum and enjoy the cultural preservation work.

The Architecture of Vietnam History Museum

Museum of Vietnam History in Ho Chi Minh City was designed by Delaval – a French architect. It’s a unique architecture in the city as the main building retains an octagon block with 2 layers of the roof of pipe-shaped tiles and stylized phoenix and dragon-shaped decorative objects. There are 4 spheres superimposing each other on top of the roof. Inspired by numerous elements of ancient Chinese architecture, the museum has been a preferred attraction of tourists who love to discover the distinctive structural features when in Saigon. An additional building constructed in 1970 created a U-shape with 2 blocks in both sides. 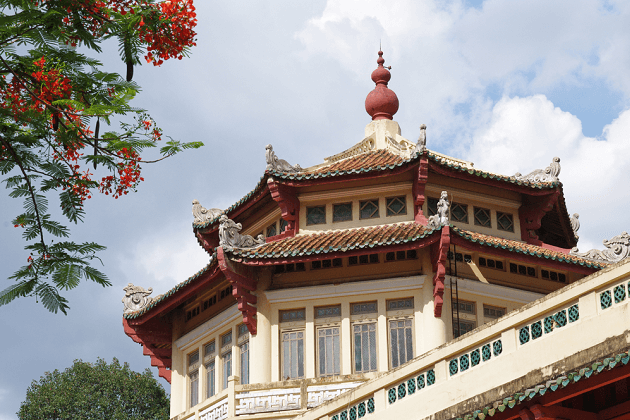 A collection of 32,000 artworks from Vietnam and other Asia countries with great values is chronologically arranged inside the museum. The exhibiting theme consists of two sections. Section 1 is 15 galleries of artifacts and antiques from the primitive period to 1930 over the periods and dynasties. Section 2 shows topics characterizing Southern region such as Oc Eo culture, Mekong Delta ancient culture, Champa art, Ben Nghe – Saigon, ethnic groups in Vietnam and culture of some Asian countries. Every exhibition is worth admiring; however, due to the great number of sections, we just list out some typical parts in the museum. 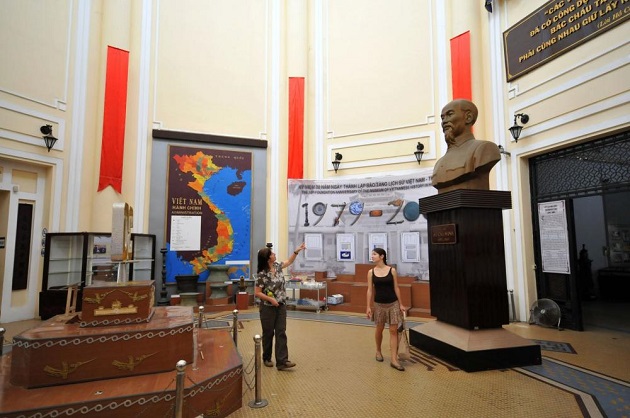 You will find interesting artifacts and information panels of the Stone Age period of Vietnam which lasted a hundred thousand years before 2879 B.C in this section. You can also find large sculptures made and used by prehistoric men in the period.

From 179 BC – 938 AD, Vietnam is under the occupation of neighboring China. This was also the time Vietnamese cultures got most influenced by Chinese culture. In the section, ancient pictures of Hai Ba Trung, and Ba Trieu (the three heroines in early ages in Vietnam history). In addition, a small bronze drum and an imitation of a typical house in Northern Vietnam are also displayed in this era.

The Tran and Ho dynasties ruled the country from the 13th century to the 15th century. This spacious exhibition area presents a huge picture of the Battle of Bach Dang in 1288 and the replica of wood stilts used in the battle. Go further to the next room, you will see maps of battles with the Yuan Dynasty and a famous quote of Tran Hung Dao – an excellent general in Vietnam history are hung on the walls.

Before forming the country with the S shape like today, Vietnam’s territory on land was only limited to the Northern part of current Vietnam. Up to the 17th century, Central Vietnam was the land of the Kingdom of Champa – an ancient kingdom of Indochina greatly influenced by Hindu culture. Compared to the Museum of Cham Sculpture in Da Nang, Vietnam History Museum has a larger collection related to Champa culture. A number of stonewares, earthenware statues of Buddha, Bodhisattva, Siva, and other deities are displayed here.

Due to the friction among Tay Son brothers, the Tay Son dynasty was collapsed and Vietnam was ruled under the Nguyen Dynasty for another decade up to 1945. You will have the chance to see the names and reign time of 13 emperors of the Nguyen Dynasty such as Gia Long (the first emperor) and Bao Dai (the last emperor of Nguyen Dynasty). Other artifacts such as ceramics, lacquered wood platform bed, ivory seals, embroidery clothes of the King, Prince, Queen, and Vietnamese musical instruments displayed in the museum tell you. 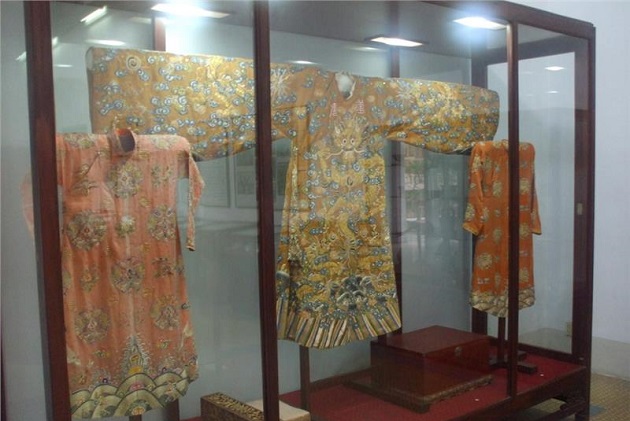 In addition to learning about Vietnamese history and culture through impressive exhibits, you can also experience the water puppet show – a traditional art performance of Vietnam. The beautiful puppets weaving on water present Vietnam folktales. The puppets are controlled by puppet controllers who stand behind the curtain during the performance. At the end of the show, you will have the chance to see the master delivering an amazing art of work. This show lasts about 25 minutes and you don’t need to worry as there is a little narrative in the show.
Ticket price: VND 35,000
Timing: 9.00, 10.00 and 11.00AM, 2.00, 3.00 and 4.00PM. The show can begin anytime if there are at least 5 audiences.

Location: No.2 Nguyen Binh Khiem, District 1, Ho Chi Minh City
How to get to the museum: You can reach the museum by its two entrances at Nguyen Binh Khiem and inside Saigon Zoo and Botanical Garden. As the Museum of the Vietnamese History is close to many striking attractions of Saigon such as the Independence Palace, Saigon Central Post Office, and Notre Dame Cathedral, you can easily get there on foot. Taxi is also a good choice which will cost you about 40,000 VND from these places.
Opening hours: 8.00 AM – 11.00 AM and 1:30 PM – 4.30 PM. 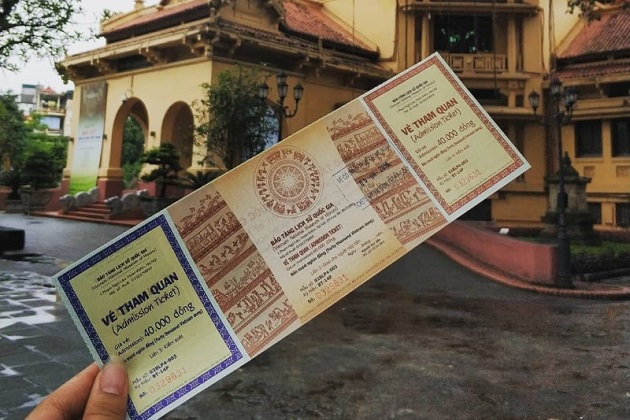 Entrance Fee: 40,000 VND/ person. There are two ticket booths at two entrances. One is next to the main entrance of the museum as you enter from Nguyen Binh Khiem Street. The other is situated at the entrance gate when you come through Saigon Zoo and Botanic Garden.
General regulations for visitors: No cigarette and photography allowed inside the museum.
Suggested visiting duration: You will need around one hour to admire permanent exhibitions. If you want to watch the water puppet show, it will be another 30 minutes.